This May get me thrown off the Bus

While I usually recommend when people take a gun class, that they take proven equipment, it is not unusual for students to show up for a CCW with a brand spanking shiny new gun, and yesterday was no exception. There were two, a young lady who had never fired more than 3 shots in her life brought a new compact Glock I did not note the model, & while the gun functioned well,between the recoil for a new shooter & the short sight radius. it was not long before we switched out to a 22 semi auto.

But the other one was a License holder who had let his license expire & was taking the class over, had a brand spanking new Para LDA super dopper subcompact PTX 45. Of course since I'm attending the Todd Jarrett class at Blackwater this month, I was interested in how the gun performed. 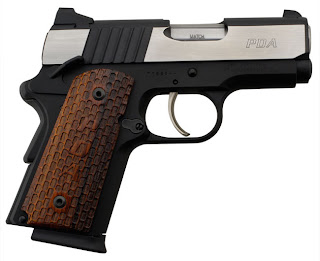 With a MSRP of 1200+ US dollars, I was less than impressed. Or perhaps I was impressed but not in a positive way (Impressions do go both ways.)

Repeated failures to go into battery, & the trigger was hard to describe not heavy, but it was hard to keep the sights aligned through the pull enough to keep it on target.

Perhaps I am bias towards medium to full size guns for carry & fighting, but this is a gun I wouldn't want to carry in a fight, to get hits I had to really setup & take the time to get the shot, & perhaps due to it's size it took a second or two to get the shot, in a world where split seconds are what counts.
I dug out my old Kimber Custom II ($450 used) & lent it to him to finish the course of fire, his comment was at least it wasn't the shooter.

Those that want to carry these small subcompacts for the ease of carrying, really need to put a lot of time in to mastering the gun, & they will burn a lot of ammo learning to control the little beasts.
Posted by The Duck at 8:40 AM

Email ThisBlogThis!Share to TwitterShare to FacebookShare to Pinterest
Labels: pistols