Spent today building two plywood barricades. They are the stair step design.
The panels were easy to cut out, now just have to figure out the bases

Not sure weather I want to install the base to the barricade, or make it removable so that it's a bit lighter weight to move around, & if I make a removable base, I could use it upright, & sideways. I like the idea of a removable base, it will take a bit more engineering, but worth it in the long run.

The project has been on a back burner for a while, but recently another Instructor ask if I could use 6 sheets of 1/2 plywood, otherwise he was going to throw it away, so all I had to do was add the 2x4's 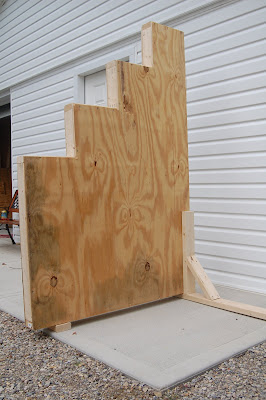 This one is 6 feet on the tall side, which is a bit to high for most shooters, but when laid on it's side it 4 ft.
But it gives you an idea, now just need to get some paint & a few other details....

These were built for range training, & not bad I figure final cost since plywood was donated to be less than $30 for both.
Posted by The Duck at 2:27 PM

Well for training, & learning how to shoot around cover, think they will do just fine