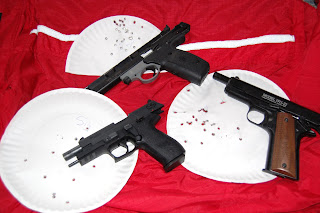 All shots at 7 yds, I shot the Sig first, then alternated between the Smith and the Chiappa, I had a bit of difficulty in keeping the Chiappa on target before the trigger break, that I fired the second mag from the bench. It was cold damp and breezy, so an extended test may have to wait. As I said in the earlier post I would expect the $300 Chiappa 1911 to perform at least as well as the Smith that is $70 cheaper. I did expect better out of Sig.

For the money & reliability, and because the manual of arms is so much like my P99, I'll stick with my Walther P22!

I wish you had included one in your comparison. Mine has been extremely reliable only failing to feed or extract when filthy during a torture test using dirty ammo. I've never had a failure to fire. It's a joy to shoot.

I highly recommend them.

Well we didn't have one to test.
From our classes the Walthers have done well, although some folks have problems with the mag release.
The hit it when they don't mean too.

I'd like to see a side-by-side comparison of some of the newer pistols versus some old standbys, such as the Colt Woodsman, or High Standard Sport King.

I had my Woodsman for 25 years, fired probably a thousand rounds through it (it WAS an antique, after all), and NEVER had any failure to feed, fire or extract. I've had failures to fire in my Sport King, but that was until I detail-stripped the bolt and cleaned the firing pin channel, none since, and I got one bum mag with it, too, but it's flawless with the one good mag.

Could it be that older, by-the-eye machining rather than CNC machining makes the difference in the better performance of the old standbys?