When will laws be passed to ban them, everyone knows knives were devised for just one thing and that is of killing, They do not run out of ammo, and they do not jam. Assault knives cause people to act violently. All knives should be regulated, and anything over 3/4's of an inch should be banned or licensed. They are silent, and kill with every strike. spray thrusting leads to high victim counts, as one cannot miss with an assault knife. They are easy to hide, some even fold, and easy to acquire, through the knife show loop hole, one can purchase an Assault knife without a background check. 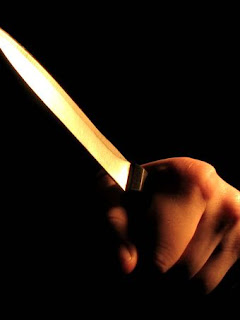 It even affects Canadians

Assault knifes can be described as having a thingy that goes in the hand, and they are usually pointed, and have one or more sharpened edges. Some have a feature called a "skull crusher" many of the folding ones , very easy to conceal, have locking blades, to protect the attacker. Some types have "Assisted Opening" so the attacker can attack faster. Some also have a feature called a "Guard' that allow for deeper stabs. They are capable of both stabbing, and slashing.
Posted by The Duck at 6:23 AM