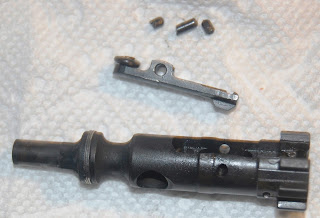 Student in Carbine class, suddenly had a non working AR, it took some effort, but once we got it apart, found the extractor pin had sheared into 3 pieces and had caused the bolt to bind inside the carrier. She was using factory brass case ammo, and the gun had between 300 & 400 rounds fired. When the gun stopped it appeared to have a double feed, which it did in addition to  a non ejected case. It took some effort to get the carrier into battery once we cleared the double feed,  then we couldn't get the BCG to retract, even with motaring, so I broke the gun open, and removed the BCG and found bolt full extended and not moving, field stripped carrier, but had to tap bolt back into carrier to remove cam pin, then found bolt was most solidly stuck in carrier. Using a vise and a long roll pin punch that fit the tail of the bolt was able to get the bolt out of the carrier. Once the extractor pin was replaced bolt and carrier appear to work fine.