Not Going to Happen

The states are not going to accept it, as a lot of states only perform a background check to issue A CCW, and Vermont does not even require a license. (Nether do Arizona or Alaska do to carry in state, but they do have training classes for those that want to carry out of state)

So unless those states set up an optional training program to go along with the carry license, it will be an up hill battle with the states that have mandatory training.

It would have to be set up similar to drivers training, while requirements vary from state to state to get a drivers license, they all cover the basics enough to get the other states to accept each others licenses.

Reciprocitys were once written in regard to drivers licenses, and try crossing a state line to hunt, with your state issued hunting license. 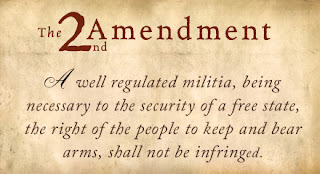 Modern Translation:
A *well trained and well equipped people, being necessary to the security of a free state, the right of the people to keep and bear arms, shall not be infringed.
*Note that "well-regulated" clearly refers to how well the militia
functions and how well trained are the militia members. It does not refer at all to the degree to which the government controls the militia or the members of the militia.
Posted by The Duck at 6:54 AM